The brown bear from our country (Eurasian brown bear, Ursus arctos arctos L.) belongs to the Chordata Phylum, Vertebrata Subphylum, Mammalia Class, (warm-blooded mammals, with the body covered by hair, which gives birth live young, that feed them with milk produced by mammary glands), Eutheria Infraclass (placental mammals in which the embryo develops inside the uterus completely due to placenta existence), Fissipeda Order (carnivorus mammals with sharp-tipped teeth, which have highly developed canines, noticed is the presence of carnasier teeth), Canoidea Subfamily (the fissipeda with long feet, not retractable claws terminated, with a present and developed penile bone), Ursidae Family (large carnivores, heavy, with plantigrade walk, powerful claws and short tail).

The brown bear can be met with some subspecies in Europe, North America and Asia, it is the species with the widest spreading area of the Ursidae. The brown bear was populating all over the Europe, but in recent centuries it has disappeared in most of the regions.

Among the causes of extinction of the brown bear include the numerical growth human population, habitat fragmentation, agricultural development and excessive hunting. Today, the number of brown bear from Europe is about 14.000 specimens, except Russia, having the habitats on an area of over 800 000 km2. In Romania the number of brown bear was approximate to about 5600 specimens, representing 40% of European livestock (Mertens and Ionescu, 2000). This number of bears, slightly exceeds the ecological optimum calculated by cynegetic authorities, which shall be 4800 specimens. Bears are found in mountain areas (93% of the population) and hill (7% of the population) in Romania an average density of the bears, are about of 8 bears/100 km2.

The bear numbers, fluctuated over time because it is a species of great hunting interest. After the Second World War bear was hunted intensively, reaching 860 specimens in the 50s. Since then, a mixture of political and environmental reasons, the species became more protected, females with cubs and den are now protected (Mertens and Ionescu 2000). Between 1970-1975, with the reason of hunting for trophies with foreign hunters, the population of brown bear was reduced with 20 %. After this time the hunting was restricted and became an attribute of the communist nomenclature. This fact was benefic for the species to a point, because the numbers have risen well above the optimal level (8000 specimens in 1988) appearing more and more often human-bear conflicts (garbage bears, conflicts with shepherds, farmers, beekeepers, etc.). 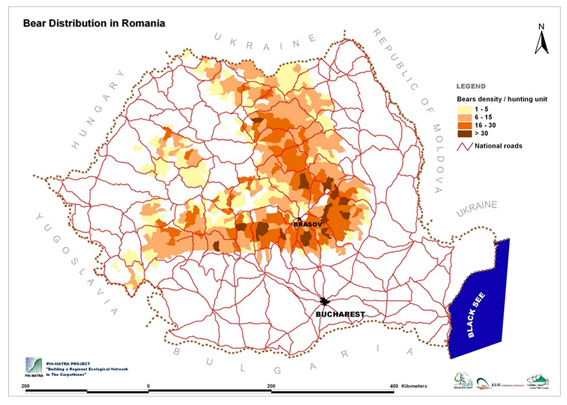 After 1990 the cases of poaching have increased, hunting has become more tolerant, so the number of brown bear have now reached about 5,600 specimens.

Experts estimate that the population of bears in Romania it is numerically stable. The estimations made by the administrators of species of hunting interest from Vrancea County (Forest Department and AJVPS Vrancea) shows that in the mountain and hills area, in 2002 there were about 304 specimens of brown bear. Their number it is approximately steady state, there is little difference between 2000 and 2002, the population increasing very slightly from 298 to 304 specimens between 2000 and 2002. Of these, about 81 bears are on the hunting territories administered by AJVPS Vrancea.

Bear’s biology
The bear size it is much discussed and a controversial topic. Normally the size it is estimated in terms of weight, which is a parameter difficult to analyze because of individual variation on height, thickness of the coat, physical stature, observer position and the level of stress. For an untrained eye the bear seems big, but the reality has shown that people tend to exaggerate the size of any animal, the more of one who has a reputation for a „huge”. Biometric data in the literature vary, this is normal , because the sample analyzed is different. Next we present the biometric data after the latest studies. 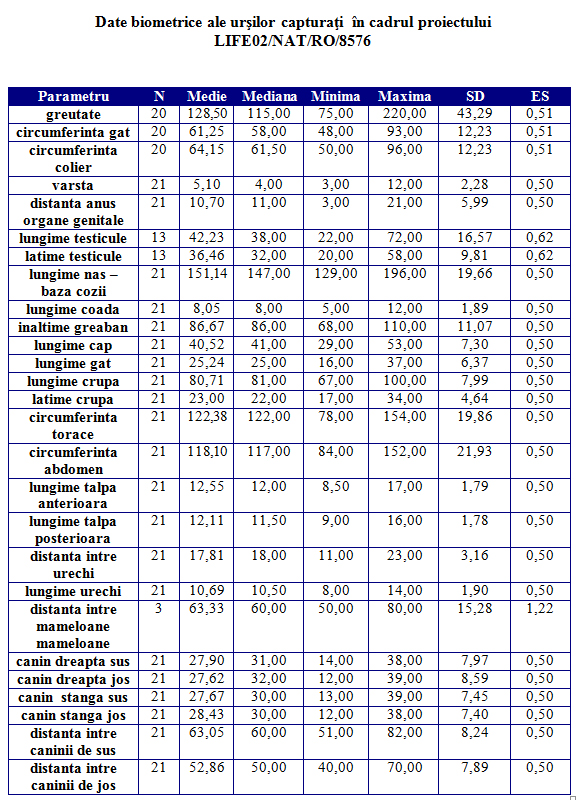 Weight differences between individuals from the same habitat are caused by the individual’s health condition, age, sex, ability to locate food and to digest certain foods, the ability to overcome the effect of human intervention in bear’s habitat. Seasonal fluctuations may occur and the individual weight, autumn (before the entry into den), bears has a much higher weight than in spring (out of the den). Bear’s weight estimation is determined in general for hunted or immobilized (for research) specimens. 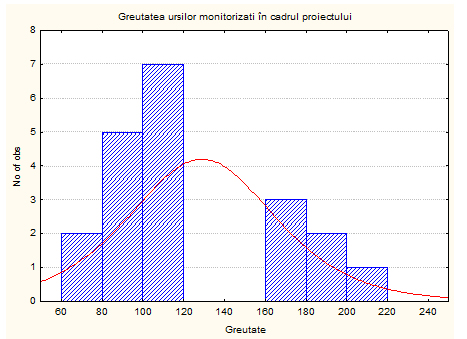 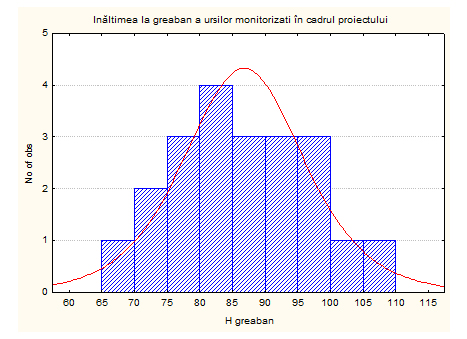 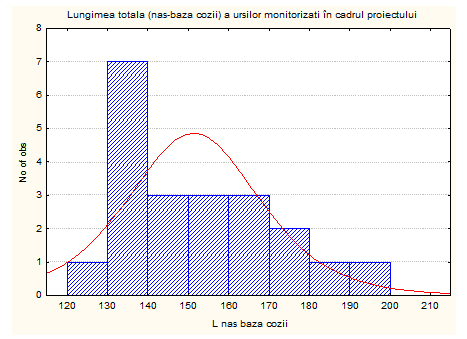 Bears coloring it are highly variable and even in the same individual. Such changes occur in coloration due to transition into another stage of maturity and because of seasonal changes. In assessment of coat color can occur errors due to differences of light or the angle from which we look at the animal.

Normally is changed only the color of the protective outside coat (the fluff), the one underneath it remains unchanged (the undercoat, ear or ember). There might be differences between the color of the protective coat and the one below it. In very rare cases we can meet albino bears in different degrees (for example a partial albino American black bear was seen in Wyoming in 1948).

In Romania the predominant color it is brown to dark brown, babies can have a white collar which disappears after the first year of life. After Micu 1999, the most common colors are brown or maroon (41%), with soft brown golden brown (15%), dark brown or chocolate (39%) and brown gray or gray shade (5% ).

Hair length varies depending on the season, the highest being in the period from December to April / May and lowest in July-September. Winter Hair length is 8-9 cm on the back and 10-12 cm on withers, and the summer hair length is 4-6 cm.

Bears, like all the mammals, must maintain a constant body temperature. The coat is a very good insulation during the winter, maintaining a constant temperature. Low albedo of the coat facilitates the accumulation of heat from the sun. Bears do not have sweat glands, the thermal and fluid adjustments being achieved in particular by:
• Staying in the den during the cloudy and cold days
• Balance between energy consumption and food ingested
• Heat dissipation through the lips, nose, paws and fur weak coverage areas (face, ears, nose, inter digital area);
• Behind the neck muscles are crossed by major blood vessels that acts as a radiator;
• Removal of the fingers;
• Baths;
• Mud and dust baths.

At the end of the autumn, after the bears have acquired enough fat for the winter sleep, they enter the den. The winter sleep takes 3 to 6 months.

The den is dug in the ground or is arranged in the natural cavities under rocks. Some bears can stay active all year round considering that found enough food. This behavior is encouraged by luring the bears at the wildlife observatories.

The length of winter sleep is directly proportional to the amount of fat accumulated during the autumn and inversely proportional to the amount of food available in winter. Winter sleep is an adaptation to the lack of food from this season. During the winter sleep cardio-pulmonary activity is reduced significantly, decreasing the body temperature to 29 -34 0c. Respiratory cycles are interrupted for about 4 minutes after 5 to 10 consecutive cycles.

A very important adaptation is the recycling of urea the nitrogen from urine is used to recompose the amino acids. The proteins resulting from the assembly of the amino acids is one of the main nutrients for the body. 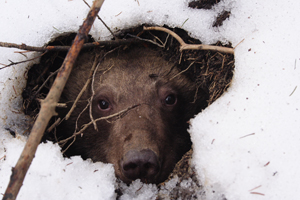 Less is known about aspects of social organization of bears, because of the difficulties that involve an extensive research of their ethological behavior. Relationships between individuals, especially adults are based on mutual avoidance, except during the breeding. Males disperse after they become adults, the females set up their territory inside or near the territory of its mother. The territories are overlapped, especially in areas of high concentration of food, are cases in which up to 80 bears live, on a habitat of hundreds of hectares, (examples cited by Mertens and Ionescu, 2000 in Dealu Negru areas, Bistrita and Domnesti – Arges, with areas with orchards surrounded by woods).

The territories size of males and females varies by area, food availability and population density. The largest territories of males are the ones of the northern – American brown bears, with 3757 km2 in Yellowstone, and the smallest ones from central Sweden and Croatia, 128 km2. The females have much smaller territories for example those of the central Sweden and Croatia occupies an area of 58 km2. Males in spread use large areas of up to12 000 km2 in Scandinavia.

The brown bear reach sexual maturity at high ages, so that the data indicate that the females give birth to first cubs at 4-6 years and an average number of 2.4 cubs. The bear is a polygamous species, male being able to breed with several females in the breeding season (mid May – early June). After fertilization, embryo is developing until the blastocyst stage, and then development is stopped until the end of November, when the implantation occurs and it starts the embryonic development. Actual period of gestation is 6-8 weeks, and the female gives birth to 1-4 cubs.

Cubs are born in the den during the winter sleep, in January and February. New born weigh about 0.5 kg and they grow rapidly, accumulating up to 70 g per day because of the nutritious milk of the female. The cubs leave the den in April-May, and they remain alone in the second year of life. The bear female repeats the reproductive cycle after their cubs will become independent, so after about two years.

The diet
The bear’s diet is omnivorous, being reflected by the dentition. Brown bears have strong canines, used for defense, animal carcass break and killing their prey. Post carnasier teethes and small premolars have large areas of contact and are associated with a diet consisting primarily of plant foods and invertebrates. The herbs and sprouts are consumed mainly in spring or early summer. Summer and early autumn the bear eats: mushrooms and fruits (raspberries, blackberries, blueberries, apples, plums and pears). In late autumn, and winter, bears eat acorns and beechnut. The insects, especially Hymenoptera (ants, bees, wasps) can be seasonally an important food source, especially because they contain protein. Due to the high degree of assimilation and high nutritional value, bears prefer meat produced by predation, from carcasses, wild animals or feeding places.